The ONLY Way To Sell Your Digital Products 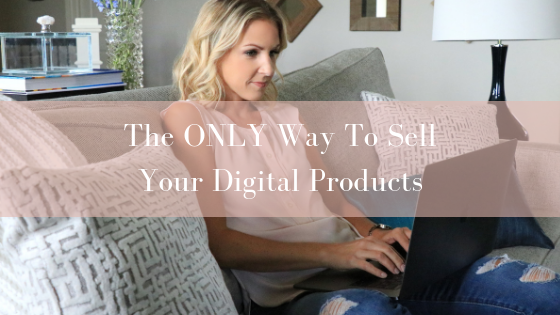 I'm really really excited to share this with you today because this is usually something that I get a little bit of pushback on. It's such a powerful way to do your digital programs that you just have to listen up! I am talking about a BIG mistake people make when they are actually creating their products. Why the online space is changing and what that means for you. Then, the ultimate accountability when creating your program.

I want to ask you…

As you're thinking, I know there are going to be a lot of yes answers here! Now here's what I want to ask you….if you've purchased something on Etsy and I told you that you paid her, then she created it and then mailed it out to you, how many of you would be completely shocked that that was what that person did? Probably not many.

You kind of assume you're going to pay her, come to an agreement of what she's going to create for you and then after you pay her she's going to ship it out to you. If you’ve attended a live event where you've paid and you may or may not know this but after you've paid maybe the topics were finally picked, the guest speakers were booked, the slides were created and all of that other stuff was put together. You probably knew that or you weren't that surprised that I’m telling you. But when I tell you that you can pre-sell a digital product people are like NO WAY!

Now, here's where I think we go wrong. We let all these other industries, all these other vendors and these businesses do that and we don't think anything of it. You order that birthday cake, tell them you need it on Friday and you go there on Friday expecting it to be ready. The person who promised you that it was going to be ready on Friday was working on it until that time came. There is no difference between what they are doing and what we're doing in the online space.

Why do I think pre-selling is a really good idea?

Here's the thing and I will tell you two stories of two different people that will completely sell my idea to you.

Story #1: One of my friends spent a ton of time and money creating an online course and while she was creating it, she hired a videographer, did her hair and makeup and filmed the whole course. She had everything ready to go, did a big launch, spent a ton of money on the launch and sold ZERO courses.

What was the problem here? After looking at the course, I immediately thought, I wouldn't buy this. So she created a program for her ideal client or so she thought, but there's a disconnect because it wasn't something I was going to purchase as her ideal client.

Story #2: One of my clients that just did her first launch, ended up bringing in 600 people for a challenge. That's amazing to build your email list by 600 people in a week. Incredible! She had a really engaging challenge but when she went to sell the program…ZERO people bought. You might be thinking why are you sharing this testimonial? Because I'm not promising that every time you go to do a launch you're going to make a million dollars. That may or may not happen. But what I can tell you is to stop wasting time on creating products that people don't want.

The ideal client may be there but sometimes we have to go back to the people that are super engaged and say what product would you have liked to see from me? What could I have provided to give even more value? That is gold and people don't understand that!

What does all this mean?

In story #1, she has a course that she spent all the time and money on but nobody will ever see it. It'll become outdated by the time she ever wants to even do anything with that program. It's just completely wasted.

In story #2, there is no wasted time in a program that was created since that program never happened. If you ever watch Shark Tank, Laurie Grenier, one of the sharks says “I can spot a hero from a zero.” She knows the heroes are going to just skyrocket and be her big sellers and the zeros, well it's just not going to work.

The problem in our business is we don't spot those heroes or those zeroes. We think everything is a hero!! We think everything we're going to do is going to just sell like gangbusters because yes, it's amazing, we created that!! But, sometimes we miss the mark. Sometimes we're just a little off and there's a disconnect between our ideal client and the product we created.

Why pre-selling is AMAZING

I like launching with pre-sales because you get to move very quickly and fail fast. Failing fast is a good thing. Putting yourself out there, figuring out what people want from you is a good thing. If you wait until it's perfect you are wasting time wondering, is this a hero or is this a zero? We've got to figure that out as fast as humanly possible.

First of all, the only way that I create digital programs right now is by pre-selling. My last presale was a few months ago and I basically came to the market and said, I want to create this program that teaches people how to create a specific product. But before I go and do that I am going to have a small group, like a founding member group. But I said… you know this program is going to be about $500.00 but it’s DIY, meaning there's none of my time involved. Now, I said to them that anybody that jumps into this program now for six weeks, I'm going to throw in some group coaching time and it's going to be the same price. It was a no brainer!! Why would you not jump in?

The ultimate accountability to get your program done

If people don't jump in for this they're never going to jump in later when it's DIY. I needed to know, do I have a product that people want? As soon as we get the yes’s and we have the program, we can say, let's do this. For me specifically, it's all about setting the expectation. When you go to sell a digital product you've got to make sure that you set the expectation.

The BIGGEST thing is that you actually keep your promises. One thing that I do when I pre-sell is I flat out say, ‘we're going to do six modules and every week for six weeks it's going to be released.’ Now people will sometimes say, what if I don't get it done in time? Again, so many people make promises in their business already and that is an integrity factor.

Are you going to hold off that commitment? What would be a reason that you didn't get it done in time? I don't know about you but this would be my first priority. I would make sure that before we did anything else on my to do list, this is first.

I would love to keep the conversation going so jump on over to my FREE Facebook group, shesbuildingherempire.club and share your big takeaway from this blog!

Enter Your Best Information To Get All The Details For The 5 Day Traffic Bootcamp!